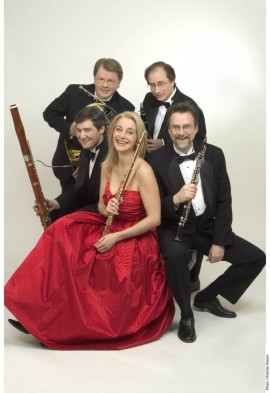 Visit website
Now in its seventh decade, the New York Woodwind Quintet has maintained an active performance schedule in the United States and abroad while also teaching the next generation of woodwind performers. The Quintet has commissioned and premiered over 20 compositions, some of which have become classics of the woodwind repertoire. They include quintets by Gunther Schuller, Ezra Laderman, William Bergsma, Alec Wilder, William Sydeman, Wallingford Riegger, Jon Deak, Evis Sammoutis, and Yehudi Wyner. The Quintet has featured many of these in recordings for such labels as Boston Skyline, Bridge, New World Records, and Nonesuch, and has just released Schoenberg's Wind Quintet on the Naxos label.

The Quintet's members also honor the legacy of departed members, including the late Samuel Baron, by continuing to perform his transcriptions of works such as Bach's Art of the Fugue and the Scherzo from Mendelssohn's A Midsummer Night's Dream, and the late Ronald Roseman, by performing his Wind Quintet No. 2 and Sextet for Piano and Winds which was dedicated to the New York Woodwind Quintet and completed just before he died. Continuing that tradition, the group regularly performs numerous transcriptions by William Purvis and several compositions of Charles Neidich.Current NYWQ members flutist Carol Wincenc, clarinetist Charles Neidich, oboist Stephen Taylor, bassoonist Marc Goldberg, and French hornist William Purvis, all internationally recognized performers and teachers, continue the Quintet's now 20-year-long residency at The Juilliard School, where they present eight seminars each year for student woodwind quintets and give regular coaching sessions.
Back to all composers