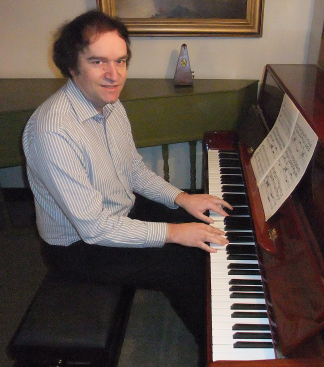 Visit website
Simon Proctor GRSM LRAM is a graduate of the Royal Academy of Music where he won prizes for composition, piano and orchestration, including the Eric Coates Prize – their top award for orchestral compositon.

Simon's compositions include a wide variety of pieces for orchestra (particularly concertos), choir, the stage, solo piano and ensembles of every shape and size. His music has been performed widely by such as the Boston Pops Orchestra – conducted by film composer John Williams, The English Chamber Orchestra and soloists including Emma Johnson, John Wallace, Ian Bousfield, and Doug Yeo. His music has been broadcast on Classic FM, BBC Radio 3 and television, ITV, Spanish radio and American TV and radio. His compositions are published in the UK and USA.

The Royal Horticultural Society commissioned Simon to write his Fanfare Jubilee to celebrate their bicentennial. The event was attended by HRH The Duke of Edinburgh.

Simon's aim is always to produce music which is melodious, harmonious and appealing.
Simon has performed solo piano recitals in the UK, Germany, USA and The Bahamas. His programmes usually combine a mixture of classical music, popular and jazz pieces, plus his own compositions. He has appeared as soloist in the Warsaw Concerto in the USA and the UK and has performed other movie concertos with orchestra including Spellbound Concerto, The Dream of Olwen etc.

He is an experienced accompanist and is also a function pianist having entertained at Leeds Castle for many years and, more recently, The Great Danes Hotel. Simon has played principal keyboard for Les Miserables and other shows, and has acted as musical director for other productions.

As arranger and orchestrator he has wide and varied experience and will happily tackle any project.

Simon teaches piano, keyboard, theory, harmony and composition, both privately and with Kent Music.
Back to all composers