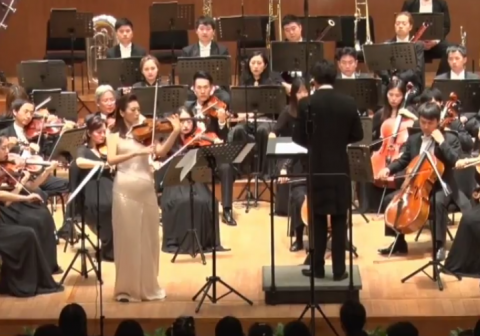 The works both figured into a programmatic theme addressing the emotional experience of adolescents and young adults. The VIOLA CONCERTO was performed by fellow Julliard graduate Liyuan Liu on viola.  The work is based on J.D. Salinger's "Catcher in the Rye".  Watch and listen to the performance here.

Peng-Peng Gong's SIXTH SYMPHONY owes its inspiration to the composer's twelve years studying in the U.S.  It is his very first expressive output that is completely autobiographical.  The composer's program notes, hinting at the character and mood of this massive work begin, "The most spellbinding memories one could ever find would probably be those from adolescence, a time where we experience our darkest and most painful emotional journey. Teenage rebellion has become the behavioral icon from such spiritual devilry which filled us with utmost arrogance and anger that made us detest virtually everything the world had to offer, while at the same time making us shed heart-piercing tears of colossal empathy toward it." World premiere video can be seen in our all-Peng-Peng Gong playlist, here.

The composer looks forward to the debut of his Tenth Symphony, scheduled for April 28th this year. It was co-commissioned by the Shanghai Philharmonic and the Philadelphia Orchestra. Read more on Peng-Peng Gong's composer page.