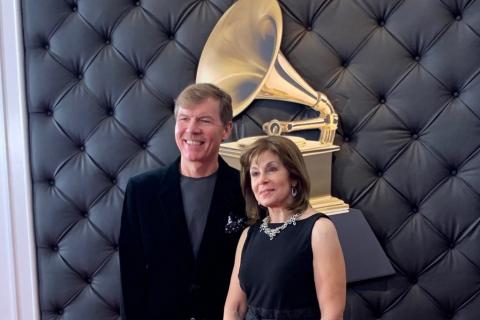 The GRAMMY® was shared by JoAnn Falletta, a classmate of Fuchs’ at the Juilliard School in New York in the 1970's, who conducted the London Philharmonic on the recording and the soloists: D.J. Sparr (electric guitar), Timothy McAllister (alto saxophone), Jeffrey Biegel (piano), and Aryeh Nussbaum Cohen (countertenor).  Fuchs has said that the compendium category is the most coveted for a classical composer.  And Falletta, who accepted the award at the ceremony on Sunday, February 10th, said on stage, “This is a Grammy that truly belongs to a team… we did it for Fuchs," whom she said, "is an extraordinary composer."  The fifth recording collaboration between Fuchs and Falletta, their mutual respect is evident in this red carpet interview.

The award-winning composer also imparts the logistical, business, and self-promotion skills he believes necessary to succeed in earning a GRAMMY®award to his composition students in this University of Connecticut Daily Campus article.  “Writing music is just the beginning,” says the composer.

The composer’s Rush: Concerto for Alto Saxophone has received a performance with the Midland-Odessa Symphony & Chorale on April 5th under the baton of Gary Lewis,  with GRAMMY®-Winning saxophonist Timothy McAllister again performing as soloist.  More performances are planned for December 7th and 8th of this year with Timothy McAllister and the Buffalo Symphony Orchestra.

Two performances of Fuchs' Piano Concerto ‘Spiritualist’ (After Three Paintings by Helen Frankenthaler), both with GRAMMY®-Winning pianist Jeffrey Biegel, will take place in early 2020: one with the Charlotte Symphony Orchestra on March 8th under Raffaele Ponti and another on April 25th with the Space Coast Symphony Orchestra under Aaron Collins.

Electric guitarist D.J. Sparr will revisit the GRAMMY®-Winning Glacier on November 22, 2020 with Symphonicity – The Symphony Orchestra of Virginia Beach, with Daniel Boothe conducting.