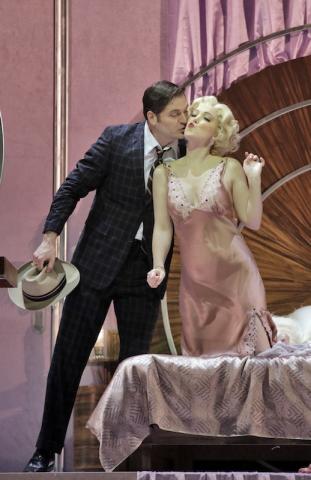 William Bolcom's opera Dinner at Eight, a dark comedy set in Depression-era Manhattan, continues to introduce audiences to its intriguing and cunning characters in upcoming performances.

Originally premiered on March 11 of 2017 by the Minnesota Opera under their New Works Initiatives as a co-production with the Wexford Festival Opera and Atlanta Opera, the work is based on the 1932 Broadway play by George S. Kaufman and Edna Ferber by the same name.  As the wealthy Millicent Jordan and her family plan a high society dinner for their many friends and acquaintances, we get a glimpse into the lives and troubles of each of her invitees.

Following the world-premiere, the University of Michigan gave four performances in November of 2017.  The Wexford Festival then gave the European premiere on October 20, 2018.  Future performances are also slated to take place at the University of Cincinnati on March 22, 23, and 24 of 2019 and the Univerity of Houston on April 5, 6, 7, and 8, 2019.

For more information about this title or any others, please contact Lauren Keiser Music Publishing, rental agent.