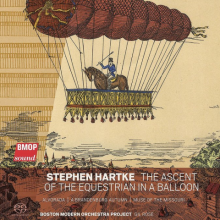 Stephen Hartke has been hailed as ”one of the most distinctive and important living composers” by The New York Times.

His album, "The Ascent of the Equestrian in a Balloon," recorded by the Boston Modern Orchestra Project with conductor Gil Rose, was voted one of the “Best Classical Music” recordings in 2017 by The New York Times.

SHIP OF STATE, Chamber Concerto for Piano and 20 Instruments by Stephen Hartke will receive its premiere on March 9, with Xak Bjerken, piano and the Oberlin Sinfonietta, Tim Weiss, conductor. Additional performances will follow on April 11, with the University of Southern California Thornton Edge Ensemble, Donald Crockett, conductor; and on April 15, given by Ensemble X, led by Tim Weiss. This performance is the first of two concertos by Hartke to receive its premiere this year.

The 2017-18 season has been a phenomenal one for Iranian-born composer Reza Vali. The Pittsburgh Symphony Orchestra commissioned a new work, ISFAHAN, to be premiered June 2018. Meanwhile, the composer has enjoyed a major label recording release, a feature-length public radio broadcast dedicated to his music and several noteworthy performances of chamber and orchestral music. The Deutsche Grammophon label has released a world premiere recording by cellist Kian Soltani of Vali's PERSIAN FOLK SONGS, SET NO. 16C for cello and piano.